The Wedding of Barbara & Tony at Langtons House Registry Office

Barbara & Tony’s Wedding was held at Langton House Registry Office on a nice sunny Sunday afternoon.  If you marry at Langtons House Registry Office on a Sunday you have exclusive use of the venue.  Barbara had disclosed to a friend at work that they were thinking of getting married in a registry office and she said “ Langton’s is very nice!” – so they went and had a look and well…. “The wedding organiser was fabulous – she talked me through the whole process and even gave me numerous ideas as to where to go for this and that” 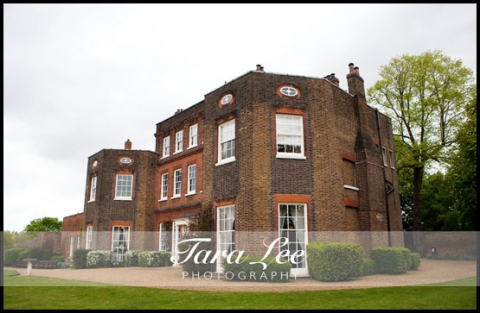 Barbara & Tony met back in the late 70’s. He was friends of people that I knew at “The Lacy Lady”. A flatmate of mine some 20 years later encouraged me to come along with her to a revival night. I was on a bit of a downer at the time and had no interest in going out but was eventually persuaded. Tony was friends of the group we were joining and so we soon got chatting.  We had only been together for 20 years when I popped the question and do you know what? He turned me down… and even several months of persisting he would not budge on his decision! 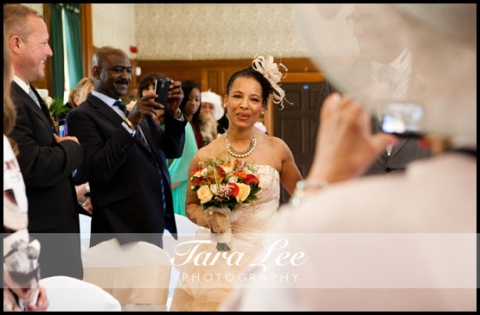 The dress is by Bailey – “I had looked at hundreds of dresses and thought that this one was for me. I kind of fancied the idea of being a princess for the day but without the tiara”. Shoes were from Monsoon in Westifeld, I’d bought months ago and think that they really influenced every step I had made in our marital preparation. The pearls were from Coast – I simply had to have them darling! Other accessories were from Debenhams’ I really had fun matching my pearls with rings and bracelets. 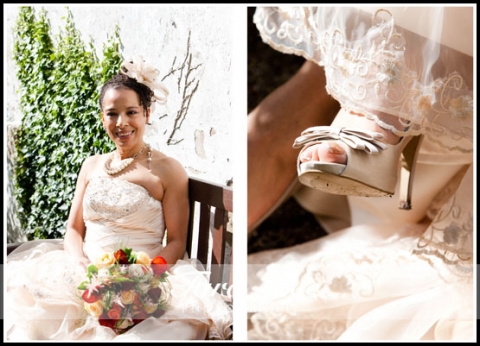 “As it was Tony’s first time I wanted to keep some of the traditional theme of tailcoat and cravat. Oh! And he liked that arrangement as well! The groom’s suit was hired from Couture’s in Hornchurch. They were so helpful and had lots of colours and designs, they were even stocked up with unusual sizes and all in all, it took literally minutes to find what we wanted. (How stress free was that event!)”.

“I had been given a number of reasonably priced florists – Bodeb’s in Faircross Parade Barking turned out to be a touch dearer than the rest but the most helpful of all the ones I had consulted. They really listened and added their expert advice to the finishing touches of our choices and well to be truthful it was all down to them as the flowers turned out more stunning than I could ever have thought in putting together. 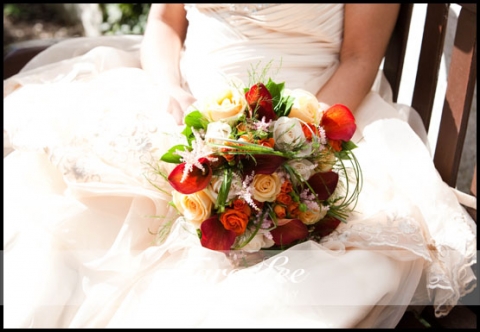 “The Peach Bridesmaid dress was by Fever and the grey wrap by Coast gave her a vintage look. The cream dress was from Monsoon for that touch of Audrey Hepburn look”. 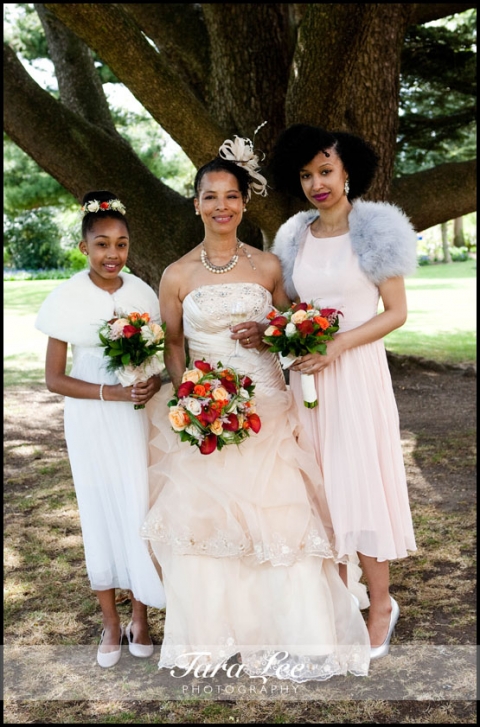 Wedding theme: “I knew that I wanted champagne, I also quite fancied shades of peaches, cream mixed in with oranges as they were eye catching happy colours I thought whilst looking through wedding websites and would also complement the old Hall”. 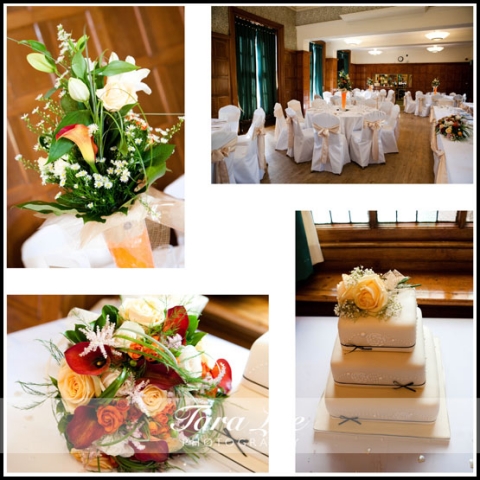 “I think my favourite part of the day was when we were all sat down having our meal at around 4pm. Everything had gone simply perfect previously, the ceremony, being out in the lawn, the canapés, and chatting amongst the guests all seemed surreal but when we were at the table I could really take a moment to look around and admire all the work that had gone in to our special day. There was the soft sound of jazz playing in the background. The sun was shining down on the recently trimmed lawn and from out of the windows the tulips were propped up in a uniformed fashion to salute the day. The natural light beamed through the room and gave a warm and inviting glow on to the tables decked with white linen and beautifully arranged flowers in their garments of white, peach & orange with a dash of cinnamon. The grand hall sparkled with its smartly attired party, enjoying the moment, relaxed, carefree, and with it came laughter and chatter in the background, the day was a success, I thought, how marvellously lovely!” 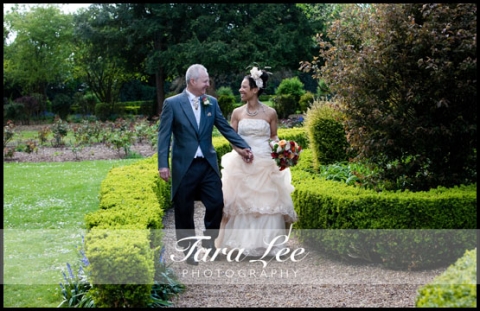 Barbara’s Wedding Advice – “The morning was damp and overcast. We were running late, and as I was hastily rushing to board the taxi, I tripped over my dress and slightly ripped it, what else could go wrong! Thankfully the sun came out as we journeyed across to the location and as is tickled against my back through the rear windscreen, something was telling me that ‘everything would be alright’. The organiser was there at hand and with an assuring smile she quickly pinned up the casualty and gallantly saved the day – her next job was to perform the wedding ceremony.”

“So to all you brides to be, take it from me, whatever happens don’t worry if things go wrong along the way – they too will form part of your happy memories. The most important thing is your union. Everything else is secondary, you have a mammoth task ahead of you but remember, there too will be lots of experienced people that can help to make your dream come true, the florist, the wedding organiser the photographer, the caterers… who have plenty of great ideas, knowledge and support… Cheers!”

Thank you to Barbara & Tony for sharing your story!!

© 2022 Tara Lee Photography|ProPhoto 6|Made by Swoone